The Oklahoma Healthy School research identified that the presence of noise from gym, cafeteria, or recreational spaces is positively associated with school performance.

In 185 completed teacher surveys, the importance of "Academic learning areas are located away from disruptive noises" was ranked high at 6 out of 92, indicating this is highly important to teachers than other school factors.

In addition, the importance of "Exterior noise from outside the school does not disrupt learning" was ranked high at 19 out of 92, , indicating this is highly important to teachers than other school factors.

Finally, the importance of "the existence of excessive noise outside the classroom that disrupts lessons" was ranked fairly high at 27 out of 92, indicating that this is important compare to other school factors.

In a survey of 6% of parents whose children attend school in one of the two districts, the importance of "classrooms and other learning areas are located away from disruptive noises" was ranked high at 7 out of 66, indicating this is highly important to parents than other school factors. 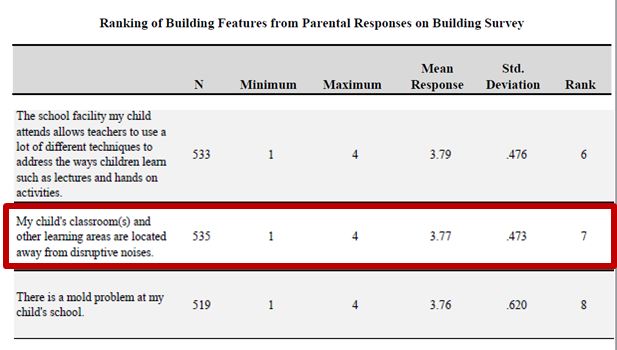 In addition, the importance of "daily outside noises do not interfere with learning" was ranked 24 out of 66, indicating that this is important compare to other school factors.

Finally, the importance of "the existence of classrooms' outside noises that disrupt lessons" was ranked 35 out of 66, this is not highly important than other school factors. 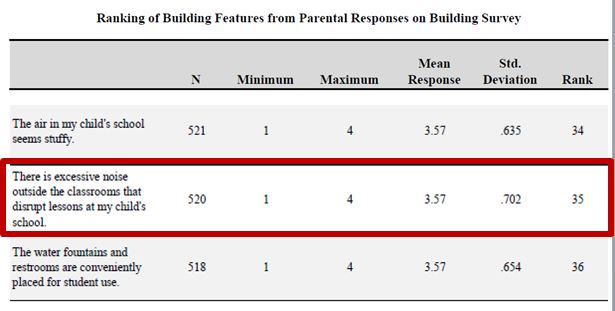